On December 24, 2021, the first dark matter search result from PandaX-4T, a liquid xenon detection experiment, was published in Physical Review Letters as the "Editor's Suggestion" [1]. The American Physical Society 《Physics》 reported this PandaX-4T latest result together with another result from the Axion Dark Matter Experiment with a title of "Tightening the Net on Two Kinds of Dark Matter" 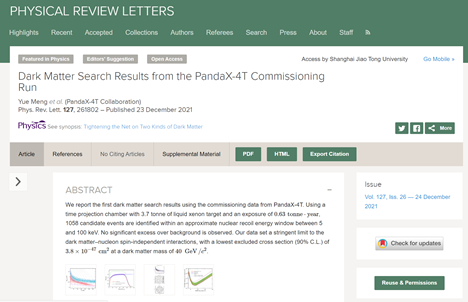 Dark matter direct detection experiment is one of the major approaches to search for dark matter. The principle is very straightforward: assuming the galaxy is filled with dark matter particles, when they pass through the Earth, it is possible to look for their scatterings with ordinary matter, e.g. by recording the recoil signature of target nuclei. The PandaX collaboration uses liquid xenon detector at China Jinping Underground Laboratory (CJPL) in Sichuan, completing two generations of experiment, PandaX-I and PandaX-II, completed in the past decade, with nearly three orders of magnitude improvement in dark matter sensitivity. 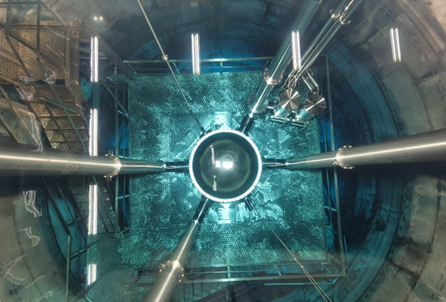 The PandaX-4T experiment is the first multi-tonne liquid xenon detector putting in operation in the world. Similar sized detectors in preparation include the LZ experiment in United States and the XENONnT experiment in Europe. The exposure of PandaX-4T commissioning run reaches 0.63 tonne·year, nearly 2 times higher than the full exposure of its precursor, PandaX-II. Key technological improvements of PandaX-4T includes: a newly built large size TPC with uniform electrical field and high electron amplification rate to assure high resolution of signal reconstruction; triggerless data acquisition system to lower the detection threshold; new xenon distillation system to purify 6 tonnes xenon and reduce the radioactive isotope 85Kr by a factor of 20 as compared to PandaX-II; various radioactivity controls and surface cleaning processes to reduce the radioactive isotope 222Rn by a factor of 6. The sensitivity of this data is 2.6 times better than that of PandaX-II. Having found no evidence of events beyond expected background, the data give the strongest constraints on the WIMP-nucleus spin-independent interactions in the world. The sensitivity of PandaX-4T is also approaching the so-called "neutrino floor", that is, it becomes possible to detect the neutrino-nucleus coherent scattering signal of the 8B neutrinos produced by the nuclear fusion in the Sun. 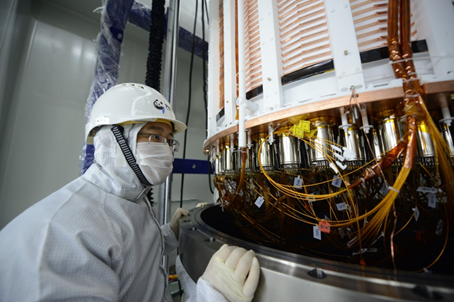 After the commissioning, PandaX-4T carried out a new round of xenon distillation in order to further remove the tritium radioactivity observed in the data. In parallel, the collaboration is carrying out analyses in multiple directions, including searching for Majorana neutrinos and astrophysical neutrinos. PandaX-4T is expected to collect data with at least 6 tonne·year exposure, enabling an order of magnitude improvement in its sensitivity.